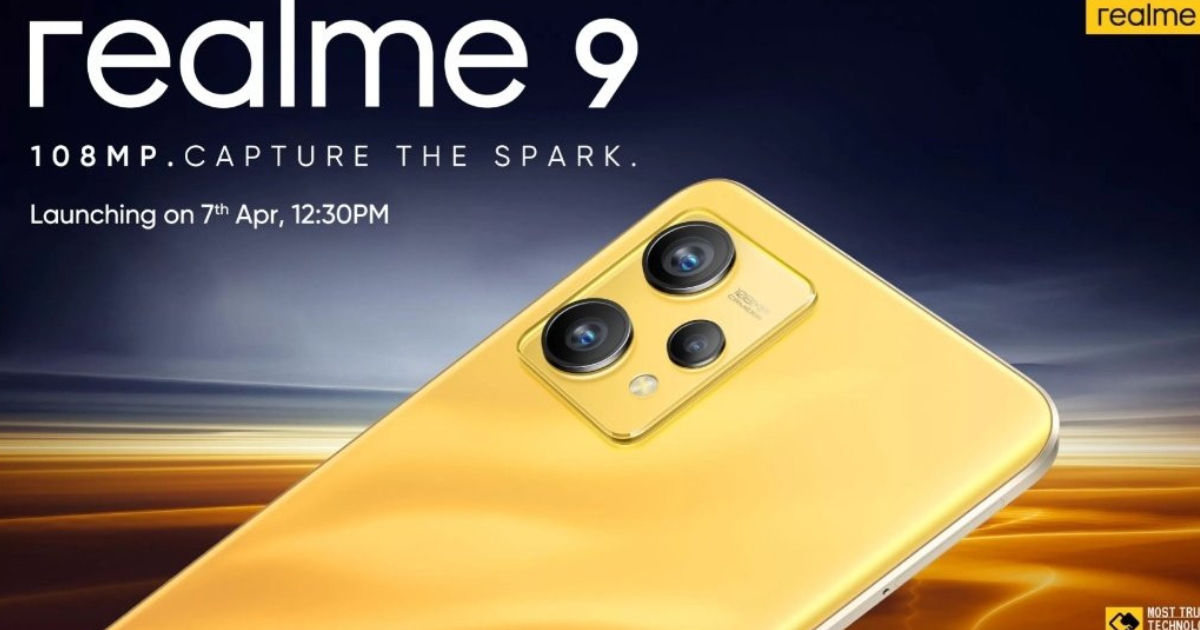 The company will launch the Realme 9 4G on April 7 in India. Realme has dropped a few teasers of the device ahead of its launch. Realme has confirmed that the 9 4G will come with a 108MP main camera sensor. Other devices such as the Realme GT 2 Pro flagship phone, Realme Buds Air 3 TWS earbuds, and Realme Smart TV Stickare also confirmed to launch alongside the Realme 9 4G.

Realme’s new teasers confirm that the 9 4G will debut in three colours – Sunburst Gold, Stargaze White and Meteor Black. The rear panel will sport what Realme calls a Ripple Holographic Design. It has a triple-camera setup on the back. As mentioned above, the phone has a Samsung ISOCELL HM6 108MP sensor. The new Samsung sensor comes with a NonaPixel Plus technology and 9-Sum Pixel Binning. It is also claimed to capture brighter pictures with less noise. As far as design is concerned, the Realme 9 4G sports a punch-hole display on the front. Its bottom edge will feature a 3.5mm audio jack, a microphone, a USB Type-C port, and a speaker grille. The design of the camera setup on the Realme 9 4G is similar to that of the Realme 9 Pro series of smartphones. It measures 7.99mm in thickness and weighs around 178 grams.

The Realme 9 4G will arrive with a 90Hz AMOLED display that will offer features like a 360Hz touch sampling rate, 1,000 nits peak brightness, and an in-screen fingerprint scanner.

Details about the processor and battery capacity remain unknown at the moment. The wait for these isn’t long as the launch event is just three days away from now. What do you think about the new Realme smartphone? Let us know in the comments below.

This is all you need to #CaptureTheSpark amidst dimly lit surroundings, thanks to its 108 MP ProLight Camera.

Two Days to Go until the #realme9 enters your world!

Now, it’s way easier to #CaptureTheSpark with its 108 MP ProLight Camera, even in low-light conditions.

We have detected that you are using extensions to block ads. Please support us by disabling these ads blocker.

Disable Extensions And Refresh This Page.